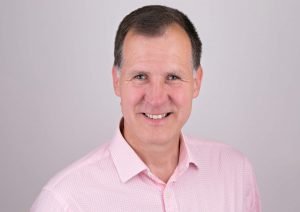 James Hasler is an event host, moderator, emcee / MC, front-man and announcer who has a background in both customer service and the performing arts. He spent the best part of his 28 years in industry working for some of the world’s most prestigious car manufacturers, including Jaguar and Aston Martin and was a champion for customer service with Saab.

However, throughout those years in the industry, he performed regularly at many live events, as well as acting on stage in his spare time. Following his extensive acting career as a successful semi-professional, James furthered his skills at City Lit in the City of London. It is these stagecraft skills and his years of experience in customer service that he uses now with HaslerHill Consulting, helping clients run their events with impact and giving them confidence in their communication skills.

In 2012, James became a Team Leader at the London Olympic and Paralympic Games and constantly guided fresh teams of “Games Makers” throughout both events. Additionally in 2012 James trained as a professional toastmaster. Following training, he became a Fellow with the Guild of International Professional Toastmasters and has since obtained notoriety as one of the country’s leading Master of Ceremonies in his guise as “The Man in the Red Coat” and was awarded the coveted title of Toastmaster of the Year in 2019. It is in this role that he works with four of the City of London’s Livery Companies as their Beadle.

During James’ time at City Lit, he also studied acting for radio and voice production. He now has a small studio at home where he regularly produces pre-recorded announcements for events, as well as narration for video and gaming. More information about these can be found at James Hasler Voice.

Finally, when not working hard at being the voice of confidence on either side of a microphone, or enabling others to gain their own confidence, James enjoys spending time with his family.

“It took over 30 years of running the Vintage Festival to get James in. All we can say is, we wish we had done it sooner. An event host and moderator to fit any occasion, James injected personality, clarity and professionalism to our event to the benefit of our 4000 customers, 80 producers and us.” Anna Leach of Laithwaites Wines.

This website uses cookies to improve your experience while you navigate through the website. Out of these, the cookies that are categorized as necessary are stored on your browser as they are essential for the working of basic functionalities of the website. We also use third-party cookies that help us analyze and understand how you use this website. These cookies will be stored in your browser only with your consent. You also have the option to opt-out of these cookies. But opting out of some of these cookies may affect your browsing experience.
Necessary Always Enabled
Necessary cookies are absolutely essential for the website to function properly. This category only includes cookies that ensures basic functionalities and security features of the website. These cookies do not store any personal information.
Non-necessary
Any cookies that may not be particularly necessary for the website to function and is used specifically to collect user personal data via analytics, ads, other embedded contents are termed as non-necessary cookies. It is mandatory to procure user consent prior to running these cookies on your website.
SAVE & ACCEPT